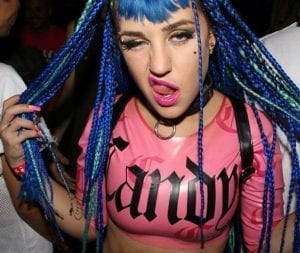 Chicks have been back to dominating the music scene for a what feels like at least a couple years now. Regardless, it’s been a long time coming and it’s not fading away any time soon. Earlier this year, when Grimes broke through and set an example for the transition and direction of music, she opened the gates for a flood of bad ass princesses of rap, pop, dance and art aesthetic all around. So now that the gates are open, let me shine the spotlight on some of my favorites. Kitty Pryde, Brooke Candy, TokiMonsta, Lil Debbie and Cupcakes are at the top of my list. And yeah, I know, surprising for someone who bathes in the world of rock, grunge and punk. But this hard candy pink ass rap cutesy kitty sound is amazing. How can you not like it?

At one of our most recent Check Yo’ Ponytail events in Los Angeles we had a packed line up featuring a handful of these gals. Kitty Pryde and Lil Debbie shared the stage with the likes of Riff Raff and Fat Tony and and stole the spotlight. Plus, when you’ve got Grimes and Brooke Candy roaming around, you’re pretty much in the presence of musical deliciousness to say the least. After this line-up I had to delve into what Candy was all about, and fuck, it was awesome. I know there’s Iggy Azalea and Azealia Banks and all that, but something about Brooke Candy just kind of slaps you in the face and you’re still smiling at the end.

And then there’s other bits of sweetness like Cupcakes from the Brooklyn based Hank & Cupcakes. I had the pleasure of touring with them a couple years ago and witnessed the drool factor aroused from a bad ass bitch banging on drums and singing her heart out. From an east coast tour to SXSW and beyond, this duo continues to add the icing to your musical playlist. With songs like Pleasure Town and the amazing cover of Joy Division’s ‘She’s Lost Control’ . . . you’re left in awe at the end of a live show.

And yeah, I can handle more. It’s quite refreshing to see girls stepping outside the box and just putting it out there, and it’s pretty awesome that there’s finally some girls with legit talent doing so. You don’t need to candy coat something that’s already sweet. Just put it out there for everyone to sample. Everyone’s got a fever for the flavor, and fortunately there’s a good variety of tarts serving some up.